”Viktor Vidović astonishes us with his brilliant technical knowledge which ideally corresponds with his inner sensibility.” (S. Raca, “Hrvatsko slovo”, 1996.).

”His well-known technical and interpretative perfectionism has settled into a new quality of inner profoundness and amazing suggestiveness. We cannot resist paraphrasing a sentence addressed to J. de Pres: ”While other musicians do with a guitar what they can, Viktor does what he wants” (Lj. Ščedrov, ”Karlovački tjednik”, 1994.).

”Some people live music and live with music, it emerges from all their deepest inner selves. Viktor Vidović is one of them. He has penetrated all secrets of his art, his skill is art and, while standing on the stage, his stage appearance attracts like a magnet, focusing all the senses only on him” (A. Čakarun, ”Slobodna Dalmacija”, 1999.).

”The closeness between Vidović and his guitar is felt in each measure and it would be meaningless to describe his music with stereotype musicological phrases” (J. Knešaurek, ”Hrvatsko slovo”, 1999.).

”This young man is a poet. He keeps his guitar on his hearth, but without concealing the hearth itself: It is obvious in each of his interpretations. His music brings delights: he is so skilful with his six strings. He touches his guitar like in a dream. His music has a dreamlike depth. One cannot expect aggressiveness from him – Spanish Gipsies, evoked by his performance, are wearing bow ties. This reverie is so beautiful!” (A. Peyregne, ”Actualite Monaco”, 1989.).

”We can also say about his brilliant virtuosity that he projects it with such an ease as if it was an artless child’s play. There is also one more relevant element in his playing music which is often lacking in other guitar-player’s solo performances: not only that his tone is clear, noble, sonorous and pure, colourful and rich, but Vidović has shown that it can be clearly and distinctly heard even in the most silent dynamics” (A. Čakarun, ”Slobodna Dalmacija”, 1999.).

”This extraordinarily gifted musician enchants us with the flexible, resonant sound of his instrument, his impressively mobile left hand and freedom in shaping works of art, better to say details on which his personal creative and the entire spirit of the composition is founded” (S. Raca,“Hrvatsko slovo”, 1996.).

He ”renders a perfect vision of every style: his secret lies perhaps in the sensibility eager of beauty, wherever to be found” (P.H., “Journal de Jura”, 1989.).

”The expressiveness of each single tone, motif and phrase as well as the meaningful roundness of the whole reveals the already confirmed, but always amazing maturity of the young musician” (A. Mežnarić, “Hrvatsko slovo”, 1998.) who ”with pride and security promises a splendid career” (M.-L.T., “Tribune de Geneve”, 1988.).

”His music is listened to breathlessly, there is so much beauty, purity and inner force in this fascinating artist. Virtuosity and ease with which he masters even the most difficult requirements of the score enables him to carry out completely the fine tone of various vibrations, as well as to shape musically and calmly melodic lines with effective accents, dynamics and easy-going passages” (V. Požgaj, “Vjesnik”, 1996.).

”Thousands of tonal colours, now bright, clear and distinct, then breathlike and refined, give so much life to Vidović’s music, opening a whole musical universe upright in front of us. He also fascinates with musically logical leading of the motif, so clear and pure in every detail, that it irresistibly reminds of the clear brightness of a rock crystal, through which every, even the smallest line is seen” (Lj. Ščedrov, “Karlovački tjednik”).

”Since he is fully bent to his instrument and so accustomed to it, he is simply a great and true musician” (P.H., “Journal de Jura”, 1989.).

”Highly demanding virtuosity of compositions on Vidović’s CD, thanks to easiness by which his fingers resolve even the most difficult technical tasks, is not instrusive at any moment and a purpose for itself, but on the contrary, it becomes a means of ultimate artistic expression” (Branimir Pofuk, Jutarnji list, 2005). 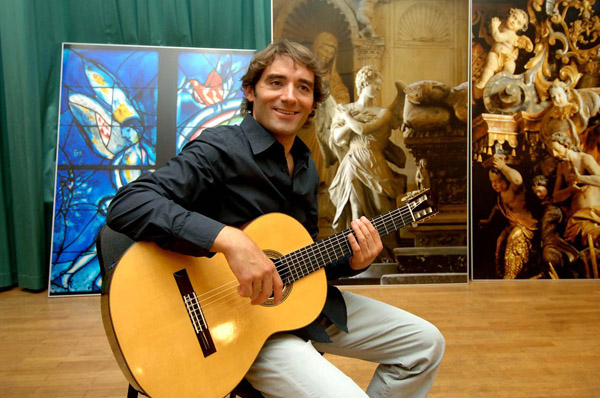